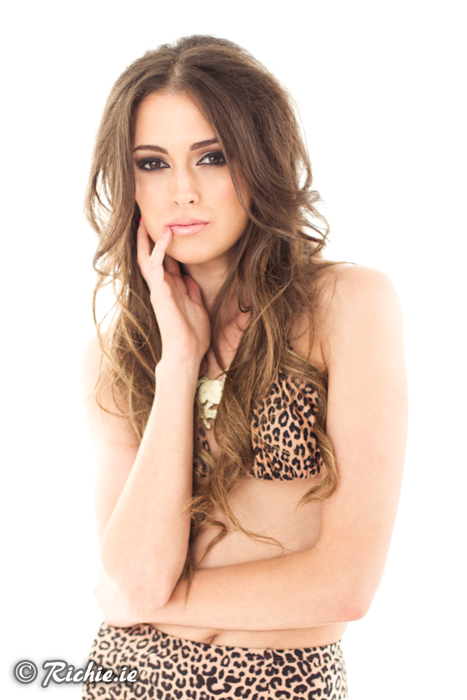 Rebecca Maguire is the stunning Belfast girl who won the Miss Ireland 2012 title. I first worked with Rebecca when she won the Miss Wright Venue in 2012, and from there she went on to win Miss Ireland. We shot this in June as her reign was coming to an end. We were shooting for the double page feature in the Irish Sun and for the cover of the Sunday World Magazine.

We assembled a great team for the shoot. Rebecca came down to my studio from Belfast for the shoot. Aimee came from Dublin for make-up. Edel drove down from Baltinglass. Laura popped out from Enniscorthy and Jason joined us also to video the shoot. The team worked great together and we got some fantastic images.

This was my first time working with hair stylist Edel Jones. Edel works in Tecknicolour saloon in Baltinglass. Edel done fantastic job with Rebecca. My favourite hair look from the day with the one above… there is a hint of a Cheryl Cole look going on I think. Combined with the fabulous dress, it is a very hot look. Rebecca really rocked it this look, which you can see in the video below.

As you can see from the shots, there was a lot of colour going on. It was the height of summer, so why not. Laura done a great job with the styling here I think. I am no expert on styling, but it all looked good. For a detailed breakdown on the styling and Laura’s train of thought for it all, you can check out her own blog post on the shoot. Check out on Lipstick Gossip – Meeting Rebecca Maguire

Below is a behind the scenes video shots by my assistant and DE Photo Staff member Jason Ennis. I kind of throw him into the deep end on this one as it was a last minute thought.  Jason shot it on one of my Canon 1D mkIV bodies. I later edited the footage together and below is the result.

The “Miss Wright Venue” title is a highly contested accolade. It is one of the most popular entry paths into the Miss Ireland. The 2011 title holder was Faye Fooney and she represented the Night Club  very well, so well she is now an employee in fact. The Belfast Beauty Rebecca Maguire was crowned Miss Wright Venue 2012 last month.

Rebecca is no stranger to the world of pageants or fashion. She is a hot favorite to win the 2012 Miss Ireland title as she came second last year after been beaten by Holly Carpenter. It was a tough contest last year as both were great contenders, but only one could win. This could be Rebecca’s year though.

I sponsored a photoshoot for the winner of Miss Wright Venue 2012. The shoot styling was also sponsored by Nicole Spain of Flutter On By Fashion Styling. Go check the out if you are looking to do a styling course. The Hair sponsor for the shoot was Shauna Spain Hair Styling. Go check out here great deals on a blow dry at the moment. Aine Cahill was on hand to provide her Make-Up artistry skills. Aine a graduate from LA Make-Up Academy did a great job. Finally, the dresses were provided by The Ivory Closet Dress Hire Limerick. The Ivory Closet are a popular name these days when it comes to quality dress hire.

I was delighted to meet Rebecca and her Mum (Hey Charlotte) and Auntie Karen in the Wright Venue Penthouse for the craic at the after party. We started to plan the shoot straight away to get the ball rolling on it. The aim for the shoot was to shoot some elegant shots with Rebecca modeling the fantastic dresses from The Ivory Closet along with some classic swim ware shoots as well as a lingerie look. Time was limited for the shoot and we had a lot to get through. I think we managed to cover the plan fairly well though 🙂

Rebecca looks great in these swimsuit and lingerie shots though, as I am sure you will agree. You can check these shoots out in the Irish Sun Paper .

We shot on location at the Wright Venue…. well Rebecca is the Misses of the place after all 🙂 . The WV is a fantastic venue and top class club. It has some lovely features and unique places that make for a great shooting location / background. However, here in lies the problem. It is now hard to shoot there while doing so in a creative and new way. The last thing a photographer want is to be shooting a model in the same way as 2 or 4 other photographers. That is a common problem when shooting at popular locations….. how do you make it look different? Well in this case, it’s not so much about making it look different persay but trying to shoot from either a different angle or by using different lighting.

For example, the Scarface room is a cool private VVIP part of the venue. It has been shot by so many different photographers with so many different models in many different ways… its hard to get a unique take on it. Coupled with that the time limit that we had ( there was a fashion show on later), it’s often under pressure that the solutions come about. My solution was to use my Magic light a.K.a the Orbis Ring Flash. Check out all the black and white shots to see the effect of that.

The Miss Ireland Final is on the 28th of April, so there is not long left for it now. I want to wish Rebecca the best of Luck with it…. I know she will do great.