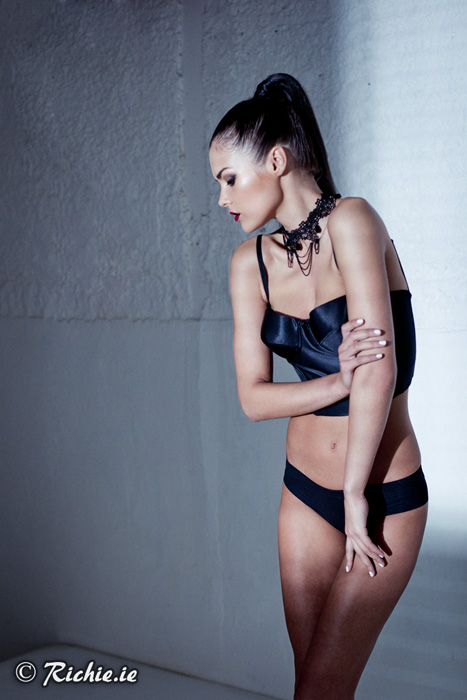 Dana Arikane, the Latvian beauty dropped down to the studio for this, our second shoot recently. Our first shoot was nearly a year ago… hard to believe. That shoot was for press – see here. This  was a test shoot that we organise to try out some new fashion and sexier looks, also to work with some new style team members.  The team consisted of Hairstylist, Aine Ryan, Makeup Artist Sophie Wong and Stylist Laura Mullett ( lauramullet.com).

Dana is a fantastic model and has a naturally sexy look, so pulling of that look was no problem. Combine the Eastern European looks,  that attitude and this gorgeous lingerie that Laura sourced in Gorey, it is a great combination. The Boutique in Gorey is Dee’s Lingerie.

The shot above is one of my favourites from the shoot. The lingerie is of a shear design and you can see a hint of nipple through it which is ( in my opinion) is classy and attractive. Unfortunately shots like this may still be seen by some to be over sexy or raunchy and thus there are a few people would actually do this kind of shot. At the end of the day… everyone has nipples.  There are still people on Instagram and Facebook though who are very quick to report images with nipple on them.

This set of images is another series of shoots on the white wall and the Terry Richardson Lighting.  I shot these with canon flash on the camera using a Custom Bracket Mini. It is a great little tool that allows the flash to be placed over the lens axis when in portrait mode. It reduces the appearance of the shadows.

I shot these with just the bare flash, no diffuser on the flash. One of the things you notice with the bare flash is the light falloff – dark corners. Dark corners are more noticeable here as the wall is white in reality which appears grey when under exposed. Speaking of under-exposing, when shooting with the flash on camera, I usually shoot ETTL. This works great most of the time. When you are shooting against a white wall like this, you need to dial in exposure compensation. If you don’t the camera things that the scene is over light ( with all the white) and will then reduce the flash power. Generally +2 stops is a good place to start I found.

The shot above was lit using a standard studio strobe with a grid spot on it, hence the spotlight effect.

For the shots below, I was experimenting with the blinds I have in the office. I set a light up in the office and shot through the blinds, which created this effect. The light was about 20 feet away from Dana in this shot and hence the harsh shadow, despite her being away from the wall also. Normally the shadow gets softer the further away you move from the wall.

Below is the same setup, just a different angle and in colour.

Finally I will finished up with Dana in makeup with the fab Sophie Wong. As always, if you have any questions on anything,  leave them below in the comments section.

Rebecca Maguire is the stunning Belfast girl who won the Miss Ireland 2012 title. I first worked with Rebecca when she won the Miss Wright Venue in 2012, and from there she went on to win Miss Ireland. We shot this in June as her reign was coming to an end. We were shooting for the double page feature in the Irish Sun and for the cover of the Sunday World Magazine.

We assembled a great team for the shoot. Rebecca came down to my studio from Belfast for the shoot. Aimee came from Dublin for make-up. Edel drove down from Baltinglass. Laura popped out from Enniscorthy and Jason joined us also to video the shoot. The team worked great together and we got some fantastic images.

This was my first time working with hair stylist Edel Jones. Edel works in Tecknicolour saloon in Baltinglass. Edel done fantastic job with Rebecca. My favourite hair look from the day with the one above… there is a hint of a Cheryl Cole look going on I think. Combined with the fabulous dress, it is a very hot look. Rebecca really rocked it this look, which you can see in the video below.

As you can see from the shots, there was a lot of colour going on. It was the height of summer, so why not. Laura done a great job with the styling here I think. I am no expert on styling, but it all looked good. For a detailed breakdown on the styling and Laura’s train of thought for it all, you can check out her own blog post on the shoot. Check out on Lipstick Gossip – Meeting Rebecca Maguire

Below is a behind the scenes video shots by my assistant and DE Photo Staff member Jason Ennis. I kind of throw him into the deep end on this one as it was a last minute thought.  Jason shot it on one of my Canon 1D mkIV bodies. I later edited the footage together and below is the result.