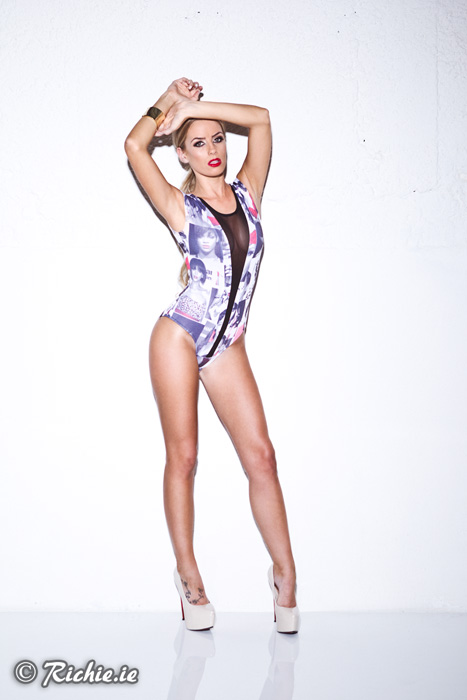 Kelsey visited my studio earlier in 2013 for her first portfolio shoot with me, she got on great then. Since then she has pursued the modelling and also entered the DIVA Next Door competition. She done fantastic at that and won the October slot on the calendar. She dropped down to me for a second time for a test shoot. I wanted to work on  the whole “White Wall” & Terry  Richardson look. During the Summer of ’13 I went through a phase of trying to emulate the look. I found it interesting for a number of reason.

Terry Richardson is an accomplished photographer who has done many wide and varied projects. He happens to be just best known his white wall look – The TR look. This look is basically a white wall and single flash on the camera. The look is very simple indeed. Where Terry makes it his own is his interaction with the subjects, the expressions and the general coolness of the images.

Flash on the Camera! Yes you heard right. I know there are a lot of people ( me included) who started of learning about lighting and thinking that you need to get the light source away from the camera to give flattering light, interesting light etc. So with the TR look and putting the light back even closer to the lens seems counter productive.

In using the flash on the camera for this method, it is not the normal flash on the hot shoe. Instead, the  flash, the actual source of the light needs to be moved closer to the lens axis. Older film camera and pocket digital cameras have a setup like this. For DSLR camera, a special bracket to move the flash close to the lens and a sync cord or TTL cord are needed to be able to fire the flash.

For these shots with Kelsey, I did not have such a bracket ( I do now though). So to achieve a similar effect, I setup a single studio strobe with a 21cm reflector and set it at my eye level. I used just a reflector to try to recreate a speedlight, which is a small and harsh light source. To achieve the look, I just took the shots with the camera placed right under the reflector.

The idea of keeping the light source close to the lens axis is to reduce the appearance of shadows and to give an even ( but harsh) light on the subject. Another photographer who uses this look a lot is Irish-in-LA man and PLayboy Photographer, Tony Kelly, go check out his work. Combining one light ( over exposed a tad) and some curves adjustment, you’re well on the way to creating the TK look.

It was the summer of ’13 when I started liking this look and because I am behind in my blogging a good bit, you will be seeing a lot of similar images on the blog over the while. You will be able to see the progression of the look as I try different  techniques.

If you shop online and have checked out Ismodo.com, then you will reconise Kelsey Flood ( @KelseyFlood). She works for Ismodo as their in-house model along with working in the sales department. Kelsey has being doing shoots with various photographers for a while now… a quick google search can help you find a lot of her previous work to date.  Kelsey booked her shoot with me looking to get something a little different for her portfolio. We shot a couple of varied looks that morning, what you see here are kelsey’s favorites from the shoot.

Kelsey’s first pic was this shot in a beige leotard. The first thing you notice about this shot and Kelsey in general is her hair. Her hair is her pride and joy…. and it is all natural. Not Great Length or Hotloxs extension in sight. Seeing hair like this is truly rare in models these days as most have some form of extension.

The first look was shot on my new ( at the time) Infinity Curve ( post coming soon). An infinity curve is basically a white floor connected to a white wall via a curve to give a seamless effect…. or infinite background. They can also be called cyclorama, Cyc Wall, endless wall … along with a few other names. I built a 6.5m wide one at one end of my studio. You can use white background paper, but doesn’t last forever and is expensive. Paper is limited in its width, so you can not shoot large groups on it. I use a lot of background paper for various reasons, so the curve ( or stage as my non-photography friends and family are calling it) will pay for itself.

The above shot is another of Kelsey’s favourites. It’s a classic topless, yes beautiful shot. Shots like this are simple and effective. I used the rugged look of one of the studio corners as a background, a single light on Kelsey. Shooting at F1.8 on a Canon 50mm throws the background nicely out of focus and isolates Kelsey… and all that hair 🙂

The last look of the shoot, and most shoots is the wet hair look. Kelsey loved this look as she had never done anything like this before. It is funny that a lot of people do not want to do the wet hair look on the day, but after a bit of convincing, it usually turns out to be their favourite shoot. This shot in particular I really like Kelsey’s expression. Her eyes are confident and her slightly open lips soften up the whole look. Some people may purse their lips which is generally unappealing.

The make-up in the shot above is fabulous, another reason why I like it. Aimee Connolly done the make-up for Kelsey along with her hair for the shoot. If you would like to book in a shoot with the dream team in my studio, check out my next available dates on my “Book Me” page. Remember, you don’t need to be a model to have beautiful pictures of your self 🙂

Kelsey in the make-up chair with Aimee