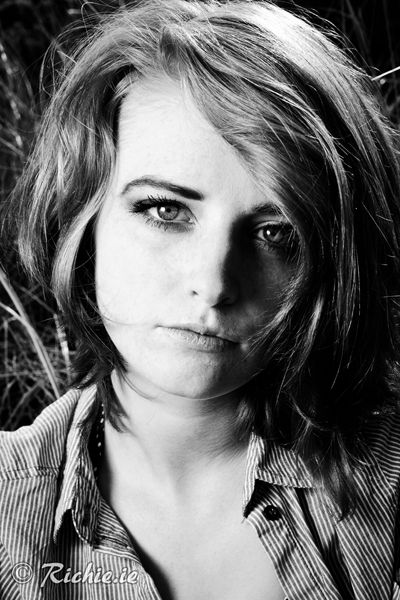 Rachel is another one of the many DIT models I have shot. Rachel was involved in the DIT Fashion Show. Rachel is currently signed with Catwalk Models in Galway. Rachel has a really nice look and it was great to shoot with her on two occasions. She has catwalk experience and has done a good few fashion shows. Working with experience models always make things easier when it comes to posing and general atmosphere on set.

The two shoots were a fashion shoot on the streets of Dublin at night and some beach shots. For the Dublin shoots, we were aiming for a dark look. Ann-Marie Carey was on MUA duties with Danilo Tavares was on hair. Both did a fantastic job. I was assisted by Cameron ( Snapt.eu), who was a big help in the location scouting and the lighting on the night of the shoot.

This shoot has its lighting problems in that the areas is lit by ugly, yellow sodium vapour street lights. This alone was not that big a deal from an ambient light point of view. A custom white balance on the Nikon D7000 worked a treat and produced a nice result…. almost cinematic feel, which is what I was hoping for. The problem then came in trying to use fill light. I do not have big reflectors to reflect back enough of the light. My initial reaction was that I wanted to used flash, but with this custom WB setting, normal white light was shifting to dark blue.

I knew that I needed to balance to my flash with the ambient. This is a trial and error process. You basically need a lot of CTO and 1/2 CTO gels with you and keep adding them to your flash until the light from your flash looks good on your subject. I think I ended up with an equivalent 3 1/2 CTO gel, which was made up of 5 or 6 individual gels. The main problem with this is that each gel added decreases the power of the flash…. power that is already scarce due to the distance from light to subject and I was wanting to keep the ISO low on the body to keep noise down. But it all worked out in the end.

The other set of shots are from a beach shoot with Ray Byrne. It was a great day on the beach and we got some great shots. Here are the best ones. I really like the portrait below of Rachel. I like the expression on here face and she has amazing eyes.

I hope to shoot with Rachel again soon over the Summer to get a wider range of shots. If you’re reading this after 2011, then click to see more shots of Rachel and Ray.

You might remember this lady from a previous shoot. I originally shot Hannah on Portmarnock beach in June ’10 for some surf / beach shots. Since then, Hannah has been signed with Galway Catwalk Model Agency. Although the beach  shots went down very well with the agency and it was enough to get her signed, they need to see more range in her portfolio.  We managed to organise a full days shooting ( about 14 hours in total) to get as many looks as we could to widen the range on the portfolio.

The brief was to get a good mix of headshots, fashion, lingerie, casual and other shots. We done pretty well in covering the brief, as the images show. We had the assistance of a professional Makeup Artist and Hair Stylist, Rachel Cleary and Conor Clinch was assisting me for the day. It was a good team for the day, which was very cold and long. Styling advice was also provided by Jennie Moore, who could not be with us on the day.

The locations being used were around the Ballsbridge area. Shooting out doors is great, because every corner you turn there is a new location that you can use. The only problem is that you can not control the weather. We battled the cold, which was ok, we fought against the wind, which was awkward at times with hair and we went to war with rain… which was going to mess with the gear. Despite it all, the team did well, didn’t complain and the shots turned out good. We ended up taking 400ish frames through out the day and managed to pick out the top 40 or so images. These images were whittled down again even further until we were happy with them and the editing then began. I picked my favs, or what I thought were the best of the day and they are the ones that you are seeing here now.

The stream of photos above are the best of the day and are actually in reverse order of when they were taken. So if yo wanted to imagine the days photos start in the bedroom, then Hannah gets up out of bed and beginning her day.  The day started off with nice sunny spells (along the canal) but it only lasted a few hours as by the time we got back to the hotel then cloud cover was patchy and rain was on the way ( jump suit shots).

Having a Hair & MUA on set during a shoot make a huge difference to the outcome of the final images, like wise with the calibre of the model, which should be evident on this shoot. Both model and MUA worked very well. Having the model and MUA been good friends was an added bonus and it made the day go by that bit quicker.

My work is getting to the stage now where its the model who can influence the image more than I can. In terms of pose, attitude and general look etc. A photographers vision and direction giving are one thing, its the model’s interpretation and execution of those directions that makes the difference. Some models can get what you are trying to go and go with it. Some even put their own little twist on it and make it their own. When that happens, its great.

The same goes for the MUA and Hair. As I get better at the technicalities that goes along with taking the pictures, it would be fair to assume the same level of skill from MUA’s and Hair Stylist.  The really needs to be perfect as there is no sense in having to spend a lot of time afterwards fixing it in photoshop.

As you can see from the shot on the left, the make up is pretty spot on. Generally I am not a fan of photoshop, or to be more specific – retouching. Retouching being the editing of skin, spots and patchy makeup etc. Stuff like making legs and arms and legs smaller is time consuming. It is time spent sitting at a computer when I would much rather be out taking more photos or indeed doing other stuff.

I don’t mind processing images as much. Processing the colour corrections, contrast and brightness etc of images. Converting images to B&W is also something that I don’t mind doing, once the image lends it’s self to be converted to mono. Some images looks good in black and white, some don’t.

The lighting setups for this shoot by the way, will be going into another post over the next few weeks. I have a bit of a back log of photos to edit ( see 2 paragraphs up… last line) and once I have all that cleared, I will then compile setup info for all the shoots from as far back as Caroline.

All in all, I was very happy with this shoot. We managed to cover a lot over a short space of time and all the team got plenty from it for their portfolios and experience. I got a chance to try out some new lighting setup, one of which is similar to the inspiration post from a few weeks ago. I look forward to working with Hannah again when she is a famous top model 🙂

Just a another shout out to Rachel who done the Hair and Makeup, check her out. She is available for hire for commercial and domestic work. Also, cheers to Conor for helping out. I hope that he learned a thing or two. Even at 15, he has got skills, more than I did at 25, so keep it up Conor.

I am going to end this post on a nice quote I seen on twitter to describe photography. I thought it was a great description, at least for me:

“Photography is for people without manual artistic talent”

Thats all for now, hit the comments link below if you want to leave or view the comments.