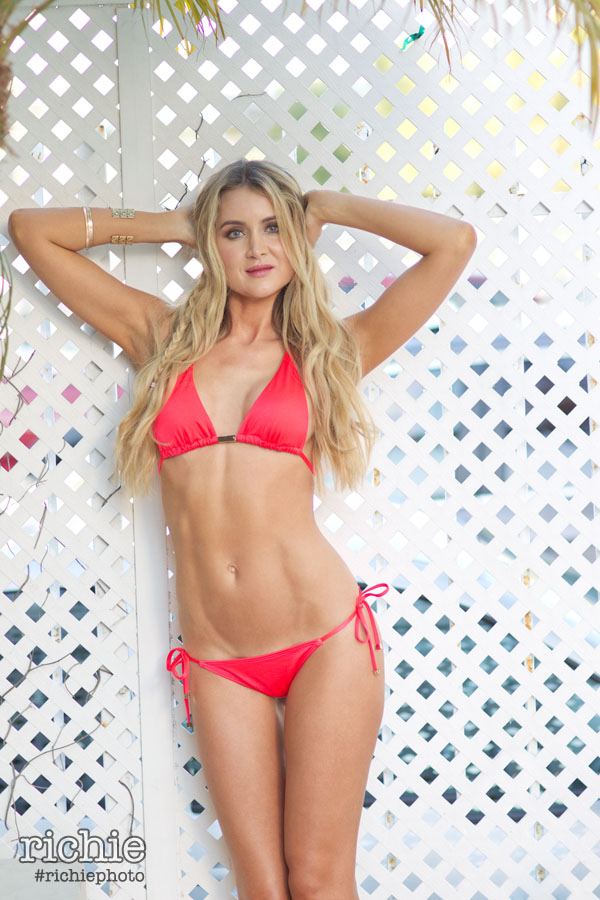 Kerrie is a beautiful Irish girl who has also found herself living in LA, Santa Monica to be exact. I meet up with Kerrie on my 2015 LA Trip for a few hours to shoot and hang out.  Kerrie is an interesting person and indeed a successful author also. You can check out her book, “Confessions of a Teenage Ballerina” on Amazon.

Kerrie has an amazing figure as the pictures show. She is a popular and regular feature on LA billboards when she models for 138 Water. You can see even more fab pictures of Kerrie on this Google Image Search.

I met up with Roz back in March 2015 on my LA Trip. Roz moved over to the States a few years now and is doing great for her self. Modelling, acting as well as some other work in the mix, she is kept busy.

One of Roz’s best claim to fame of the last while has been her Model Bombing video where she entertained the men of LA in lingerie. See below:

Here are few shots from a quick shoot I did with Katy Evans during my 2015 LA Trip. We shoot around the Santa Monica Pier area on a very hot day. Katy is featured a on ArsenicMag these days, especially on their SnapChat, so get on that if your a big snap chatter.

Check out her Wikipedia  or IMDB page to get more info

Prepare for a slight bombardment of updates over the next day or so. I am  just back from Glasgow where were were shooting the World Pipe Band Games with DE Photo. It was a busy week over there so I am only now finally getting some time to do some updates and clear up the workflow backlog.

First on the list is putting the pictures from a shoot that I had with Olivia & Carol in July. We had a week of great weather in July and I was in full swing with plenty of  beach shoots. The two girls hopped in the car for the short drive down to Wexford for some fun in the sun. Olivia is a Dancer / Radio DJ / Model amongst other things. She is currently signed to Bscene. She is fun, bubbley and great to work with. She also has the most fantastic eyes ever. Here are the best of Olivia’s shots.

The first two Diptych‘s of Olivia made it into Flickr explore one day after the other, which was cool. It is amazing the amount of views and comments that an image can get if it is in explore. The shot above attained the same amount of views in 1 week that my current most viewed reached in 3 months. But that is a mute point as currently people seem to be weaning off Flickr as their photo sharing platform. I use flickr for two main reasons:

Meaning that, with a Flickr Pro account, you can download the full res versions of any image that you put up, so you can upload 100’s of “finished” images and have them hidden from the public, ready to be downloaded if you ever need them. Also, all the images on my blog here are hosted on Flickr. I do this purely because all the images are on Flickr anyway, so there is no point uploading them to my blog also. Also, it means that I keep my wordpress database and server file management relatively simple.
All these shots were done with natural light with the help of some reflectors and diffusers.  As the weather gets worse from now on and the days get darker as we move back in to winter, expect to see the strobes coming back out and used a lot more.

If you were reading the Sunday World Magazine last Sunday (August 7th 2011) you might have seen some of these pictures. They are from a shoot I did back in early July. I am only getting to put them up now as they have gone to print. The location was Bettystown beach, which would not have been my first choice for a location due to the crowds on the day, and also know knowing what it looked like before hand, but it worked out well.

The looks was pulled by Liam Power and they were modelled by Danilo Taveres and Michelle Lima. I had worked with Danilo before and it was my first time working with Michelle. Michelle is a Brazilian model ( Danilo is Brazilian also) and she is a full time model. She is doing very well for her self over here with Compton. She is a great model, very professional and a lovely girl to top it all off.

It was an all Natural Light shoot, so there will be no lighting setup post to go with this shoot. I did however use modifiers to control the light. Control by either diffusing the light or reflecting light, basic light control really. But most of the shots are just plain out out in the afternoon sun.

As usual, any comments or questions, feel free to ask them below.

I had a shoot with Danilo Taveres at Laytown beach recently. It was a portfolio shoot for Danilo to build up his modelling book. He is a multi-talented guy, he is a a hair stylist, a makeup artist and hope to be model. The shoot was styled by Liam Power. This was the first shoot I worked on with Liam. The second shoot was for the Sunday World Magazine which will be published this week (Aug 7th)

This shoot was a pretty quick shoot as the weather turned nasty on us. It was all natural light except the last shot for which I brought out a single strobe as it was getting dark. I am shooting a lot more natural lately, when it is available. In stead of adding a strobe to fight the sun, I am now starting to control harsh sunlight, to give a soft light, rather than just blasting in fill light with a flash.

This was the last shoot I did with my Nikon Gear. From here on in, it will all be Canon 🙂

June and July are turning out to be a pretty busy month with shoots. With the few days of fine weather that we get… in between all the rain, its the perfect chance to get out onto the beach and take some shots. Only days after my last shoot with Lydia, we were back at it again, striking while the iron was still hot so to speak. I was also shooting Alyson Boyle at the same time, but I will put her pics into a separate post.

The team was the same as the night shoot. We had Ann-Jean Fitzsimons on make-up and Gill Keogh on Styling.

I like the shot above of Lydia. The make up was kept very minimal and natural to bring out Lydia’s freckles. And yes, both of us were in the water for this shot. I was hand holding the Speedlight and the umbrella in my left hand while trying not to drop the camera from my right hand. A little bit of desaturation in post and that is this image done.

The shot below is another great one of Lydia. I spoke before of her great smile, and here it is.

The shot above is all with natural light and a reflector. Some times natural light is just better, this is one of those cases. The reflector created nice catch lights in her eyes also as bonus.

I will finish up with this image, again showing Lydia’s great smile.

Stay tuned for the shots of Alyson in a few days.

Rachel is another one of the many DIT models I have shot. Rachel was involved in the DIT Fashion Show. Rachel is currently signed with Catwalk Models in Galway. Rachel has a really nice look and it was great to shoot with her on two occasions. She has catwalk experience and has done a good few fashion shows. Working with experience models always make things easier when it comes to posing and general atmosphere on set.

The two shoots were a fashion shoot on the streets of Dublin at night and some beach shots. For the Dublin shoots, we were aiming for a dark look. Ann-Marie Carey was on MUA duties with Danilo Tavares was on hair. Both did a fantastic job. I was assisted by Cameron ( Snapt.eu), who was a big help in the location scouting and the lighting on the night of the shoot.

This shoot has its lighting problems in that the areas is lit by ugly, yellow sodium vapour street lights. This alone was not that big a deal from an ambient light point of view. A custom white balance on the Nikon D7000 worked a treat and produced a nice result…. almost cinematic feel, which is what I was hoping for. The problem then came in trying to use fill light. I do not have big reflectors to reflect back enough of the light. My initial reaction was that I wanted to used flash, but with this custom WB setting, normal white light was shifting to dark blue.

I knew that I needed to balance to my flash with the ambient. This is a trial and error process. You basically need a lot of CTO and 1/2 CTO gels with you and keep adding them to your flash until the light from your flash looks good on your subject. I think I ended up with an equivalent 3 1/2 CTO gel, which was made up of 5 or 6 individual gels. The main problem with this is that each gel added decreases the power of the flash…. power that is already scarce due to the distance from light to subject and I was wanting to keep the ISO low on the body to keep noise down. But it all worked out in the end.

The other set of shots are from a beach shoot with Ray Byrne. It was a great day on the beach and we got some great shots. Here are the best ones. I really like the portrait below of Rachel. I like the expression on here face and she has amazing eyes.

I hope to shoot with Rachel again soon over the Summer to get a wider range of shots. If you’re reading this after 2011, then click to see more shots of Rachel and Ray.

Ray Byrne is a new model with Andrea Roche Model Agency. Ray is another one of the many DIT models I have shot since I started out. Ray was involved in the DIT Fashion Show in 2011 on the night he won a contract with AR Agency. Here are a few images from a shoot we had recently to get his book started.

We shot around Dublin City for a while, before heading off to the beach with Rachel Kenny. We got some great shots during the day. Here are the best ones.

The lighting was kept fairly simple for these shots. They were either natural light or there was a single Nikon SB-600 and a shoot through umbrella used. The shot of Rachel and Ray above for example, there was a light used and placed camera left.