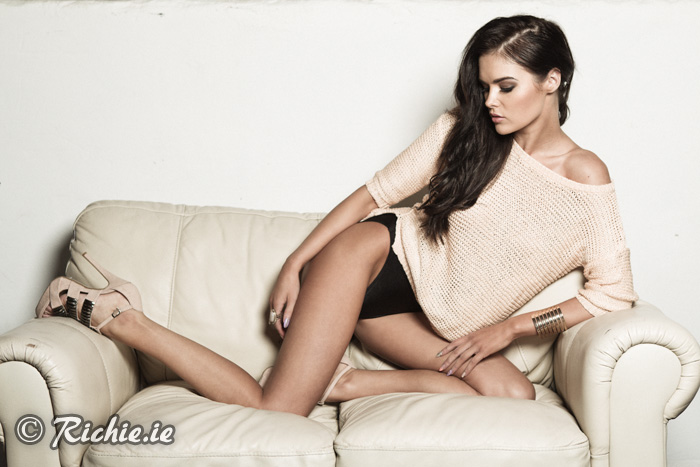 Meet Dana Arikane – Football Lover, Diva Next Door, Latvian Export, Andrea Roche Model and an avid Tweeter. Dana has been living and working here for a few years now, she is practically a local. You can get a bit more about Dana from Independent interview here.

Dana dropped by the studio recently for a shoot. She came down make-up artist Ann-Jean Fitzsimons (AJ Make-Up) whom I have worked with a few times before. Dana had also worked with AJ and worked with before, so it was going to be a great shoot.

We had a few rough plans for the shoot…. well guidelines. We done the usual thing of exchanging ideas via email etc, sample images that we would use for inspiration. This has to be one of the things that most teams to nowa days when organising a shoot. We were aiming for a general sexy look that would include some full length shots. Full length were specified as Dana has plenty of headshots from recent her recent work with Hotloxs which are concentrating on the hair.

Dana is great to work with. Along with being stunning, she is easy going and good craic on a shoot which is very important. AJ was her usual bubble self also, so all in all it was a good days shooting.

The couch made another return on this shoot. We last saw it on Christina’s shoot. I really like this shoot of Dana on the couch. It’s all in the facial expression in this shot and I caught it just right. Props like a couch however, I am trying not to use too much as it will get boring rather quick. You could say that a white wall can get boring quick also, but not so much. The white wall is more of a blank canvas that paves the way for the style, pose, make-up and the model etc. to be the hero of the picture, not the background.

Speaking of backgrounds, as my studio is currently a little bit of a building site as I get the cyc wall / infinity wall finished off.  We put all the the timber lying around to good use. One of the inspiration images we  had was very similar to this one and it turned out pretty close to what we were trying to achieve.

I will finished up with the wet look shoot above. I shoot two versions of this. The one directly above was on a white background whereas the colour version up top was shoot against a white wall.  Which version do you prefer?

As usual, if you have any comment or questions on any of my shoots, you can leave them below.

Alyson Boyle is slowly becoming a regular in front of my camera. This is the 3rd time that we have shot together now and each shoot gets better and better. She was one of my first subjects when I was just starting out on my own, nearly two years ago. Alyson has come along way in her modelling career since our first shoot. She is one of the busiest models with Assets Agency and you would have seen her on TV several times. Check out Alyson’s Assets Page Here.

Alyson is fantastic to work, and this time was no exception. She came down to my studio with fellow Assets girl  Nicola. The rest of the style team on the day were Danilo Taveres on Hair, Ann-Jean Fitzsimons on Make-up and Gill Keogh on styling. Check those talented guys out.

We did not have a whole lot of time on the day for the shoot, so we managed to get two looks in. I had this ideas for the first one after seeing various high key lighting / bright shots. One shot in particular was of Rihanna, shot by Michael Thompson. The shot is shown and lighting broken down here by Guess the Lighting.com. Obviously it’s not really near that effect, but it was a starting point for the experimenting. For a first attempt, I’m happy with the results. I will definitely be trying this out again with some changes, one of those being would perhaps be with a brunette model.

It’s good to be able to try something different like this. It’s great to be able to have the studio space in which to do it. If the experimenting works, then is a look that I have in the bad if I ever need it.  If it doesn’t work, well then it means that I know where to start from when trying it again. I will be posting up a Lighting Setup Shot of this look soon.

The other look that we shoot that day with Alyson was this shot below with Danilo. We wanted to shoot an uber sexy shot of a couple, with a nod to Calvin Kline. It’s a simple shot, style and lighting wise. What makes a shot like this is the models and their expressions. Out of about 20 shots, this one was the winner for me because the expression of Alyson & Danilo’s faces are fantastic. Look into their eyes and try to imagine what they were thinking in that scene.

Nicola Hughes is busy model with , Andrea Roche Agency,  whom I have the pleasure of shooting with recently. She has been modeling for a while now and is doing great for her self. She is great to work with and has fantastic skin, which makes the MUA’s & my job easier…… which we like.

I organised a test shoot just before Christmas with Nicola & Alyson. We wanted to get some Christmas themes shots as well as trying out some new looks for our portfolios.  It was a short day, but we managed to squeeze in some varied look in the two hours shooting with the two girls. Here are are some of the best shots of Nicola from the day. I look forward to working with her again.

The style team on the day were Danilo Taveres on Hair, Ann-Jean Fitzsimons on Make-up and Gill Keogh on styling. Check those talented guys out.

Kate McDaid is Miss Irish Sun 2011 and a model with Andrea Roche Agency. She seen my work and got in touch on FaceBook to organise a shoot. We exchange some ideas over email, met up for a coffee to finalise the details and the rest as they say is history. It was a great opportunity to work with Kate as she is the current Miss Irish Sun, there would have been a great chance to get some work published. The guys at the Sun loved the shots and they got published today (Aug 2nd 2011). This was first time getting work published, nor will it be the last. I have few bits and pieces coming out over the next week or so.

The shoot team was the same as the last few shoots. Gill Keogh was on the styling end. She knows the area around Howth and found this cool little location that we used. Tassia Fitzimons was on hair duties again. Lastly, the lovely Ann-Jean Fitzsimons was on make-up duties.

With the human team members assembled, I have some new members to my camera team. These being my new Canon 1D mkIVand Pocket Wizzards. No longer will I be bloging about poverty wizards or Nikon gear, its it onwards and upwards from here on.

Testament to Canon and Pocket Wizards, I literally picked up the new camera and all the gear, drove to the shoot, put the card and batteries in and started shooting. Coming from using 1D mkIII’s from my weekend Sports & Events work with DE Photo, I was familiar with the Canon. I set it to RAW, Flash WB and set the exposure in manual mode and started shooting. For the pocket wizards (Mini TT1 & Flex5’s) I just put in the batteries, attached the appropriate PW’s and turned them on.  On the whole the PW’s worked great, but there is some little nags that I will sort out once I read the manual and master them.

Back to Kate though. Between the rain and the lack of light, we didn’t get to finish the shoot in the second location. Which was a pity because the last two looks were going to be even sexier. Keep it here though as we will be finishing off the shoot soon.

June and July are turning out to be a pretty busy month with shoots. With the few days of fine weather that we get… in between all the rain, its the perfect chance to get out onto the beach and take some shots. Only days after my last shoot with Lydia, we were back at it again, striking while the iron was still hot so to speak. I was also shooting Alyson Boyle at the same time, but I will put her pics into a separate post.

The team was the same as the night shoot. We had Ann-Jean Fitzsimons on make-up and Gill Keogh on Styling.

I like the shot above of Lydia. The make up was kept very minimal and natural to bring out Lydia’s freckles. And yes, both of us were in the water for this shot. I was hand holding the Speedlight and the umbrella in my left hand while trying not to drop the camera from my right hand. A little bit of desaturation in post and that is this image done.

The shot below is another great one of Lydia. I spoke before of her great smile, and here it is.

The shot above is all with natural light and a reflector. Some times natural light is just better, this is one of those cases. The reflector created nice catch lights in her eyes also as bonus.

I will finish up with this image, again showing Lydia’s great smile.

Stay tuned for the shots of Alyson in a few days.